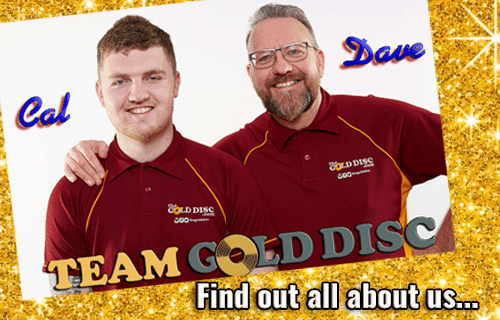 Since ‘The Gold Disc’ was established in 2002 we have framed and created Vinyl Disc, CD and DVD Presentations, Tour Posters, Books, Film Cans etc. for a wide variety of corporate customers.

It’s just a lovely way of saying Thank You!

We have produced awards in varying numbers for several high calibre clients including a one-off disc that featured the signature of Sir Richard Branson being sent to the head of Virgin Mobile in Qatar, to producing 3,500 discs over a 3 month period for Live Nation’s VIP packages.

HMV have had their 10 Year Long Service awards from us with 100’s of their staff receiving one of our 7” gold discs.

We have worked (either directly or via a marketing agency) with – Hard Rock Cafe, Shazam, LinkedIn, MTV/Viacom, Hugo Boss, Virgin, Jack Daniels & Rolls Royce to namedrop a few.

AS SEEN ON STAGE & SCREEN

Apart from Gold Disc Dave appearing on Dragons Den (Aug 16) and Callum’s winning performance on Bullseye (July 20) our wares have been featured in TV Shows, Props in Films and appear every night (when the world comes back to normality) on the stages of the West End and Broadway with the touring production of TINA The Musical. Our Music Presentations are an ideal way to say thank you from radio stations for long service, retirement, a valued customer or charity sponsor.

We have created awards for artist management companies and music organisations including; IFPI and PPL/PRS, some of the artists include: Barry Manilow (350 units) McFly (limited Edition) Jamie Cullum, and Madness.

Over the past 18 months we have been producing end of tour awards for Kilimanjaro Live.

GRM Daily have become one of our biggest customers over the past few years with the rise of UK Grime Artists producing presentations for their You Tube Channel with Plaques for 1, 10 and 20 million views of the artists videos.

Other Music Clients include: DHP Family, Disturbing London, Future Agency, Metropolis Music & Stiletto.
Over the past 18 months we have been producing end of tour awards for Kilimanjaro Live.

THEY SAID THAT ABOUT US…⭐⭐⭐⭐⭐ GOOGLE REVIEWS

Great company to work with! The staff are very efficient with a fast turnaround time. They have provided Cash for Kids with Corporate Presentation discs for the last few years and I would highly recommend their service.

ONLINE GIFT COMPANIES:
In recent years we have moved more towards the corporate side, we started off providing individual personalised occasion gifts and over the years we have become the leading suppliers of music presentations into online gift houses including Getting Personal & The Gift Experience. We offer a complete fulfilment service by manufacturing and shipping the disc directly to their customers.

The most popular presentations through the gift houses are for events like Birthday No.1’s and wedding anniversaries.

JUST WHO THE ROCK IS GOLD DISC DAVE?

Music is my passion, (even though I can’t play a note) it is a driving force in my life, and it led me to where I am now. Marketing Manager for a Japanese Automotive Company… (wires and cables didn’t float my boat Man!), so I set off on my voyage of personal discovery to do something that ‘Satified my Soul’.

Out of work, music is never far away (though gigs and festivals are off the agenda for the foreseeable) Stoke City (where I do commentary for the visually impaired) the little apple of my eye, my grand-daughter Evie and travelling with my lovely wife…

OTHER SITES
In addition to the main ‘The Gold Disc’ site we have a spin-off site which specifically targets wedding and anniversaries ‘ourfirstdance.biz’.

Launching (Officially) in March 2021is ‘thebookframer.com’ where we will be offering our framing services to authors who are the ‘New Rock n’ Roll’ of the 21st century.